While Charles Taylor’s Trial Resumes in the Hague and His Family and Church Pray For His Acquittal in Monrovia, The Liberian Truth Reconciliation Commission (LRC) and the Public Listen to Heartbreaking Stories From Victims of the Fourteen-Year Liberian Civil War: But There’s the Liberian Question

After nearly two decades since the first shot was fired in Northern Liberia and the first bomb went off, we still wait for justice. We still stand at a pause so that someone will stop and admit that something went wrong when Charles Taylor and his crazy rebels broke through our country, and destroyed hundreds of thousands of our people, devastated the entire country, raped women, men, and children, and forced tens of thousands of men and small boys to kill their own countrymen in what they called their fight to deliver our country from Samuel Doe.

In case you don’t recall, let me help you remember. I am talking about the Liberian civil war that started in 1989 and ended in 2003, the war started by Charles Taylor, the one that introduced children as young as five year olds to Ak-47s and M-16s, the war that saw a violence beyond the realms of a guerrilla warfare. That is the war I am referring to when I speak of the infamous Charles G Taylor of Liberia.

Charles Taylor, who is the first former African leader ever to stand trial for cruelty to humanity now sits in court and claims he is innocent of a war he was proud of for over a decade. He is of course being accused by Sierra Leone, not really by his own countrymen whose nation he brought the original war upon. He is accused of having ordered the massacre of Sierra Leonean nationals, of ordering countless innocent people to be killed, of ordering Sierra Leonean rebels to hack off the limbs of innocent women, children and men for the sake of taking over their country’s diamond trade, of trading guns for diamond, yes, “blood diamond,” as Americans came to know it. The drama of a war that took over the entire West African region, a violence that still lingers on today, sent all of us into involuntary exile forever. The drama of this evil that was the worst of its kind at the close of the 20th century into the 21st century is still unfolding in Sierra Leone, Liberia, and in the Hague. But the irony, which of course, is the saddest of our reality as West Africans is that Charles Taylor’s family and church members are praying and fasting that the God above us, the God who was witness to the massacre of an entire nation should come down and attest to Taylor’s innocence.

They are praying that Taylor should be acquitted of the charges Sierra Leoneans have levied against him. They are not praying for God’s will to be done-oh, as Liberians would say. They are not praying for justice to be done-oh. They believe that Taylor is innocent and that those limbless people testifying against him should be made to understand that they are wrong. What a sad day when Liberians can come to this. And yet, this is not surprising since it took Liberians to kill up their own people for more than fourteen years. 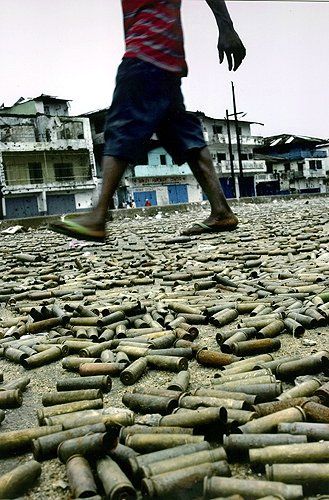 A Liberian survivor walking on shells in Monrovia in the 1990s.

But the drama is made even more interestingly sad because in Liberia, there is another historical event unfolding. It seems there is no shortage of drama even after fourteen years of the drama of warfare. Liberians are publicly testifying to the horrific violence we experienced in that war. This is a good thing for all of us. The dead will be remembered in the telling of these stories, so it is a good thing for Africa. In the United States, the UK, and in other parts of the world, the Minnesota Advocates Liberia Truth Commission is also taking statements of Liberians in the Diaspora. I was in a meeting of Advisory Board Members of the LRC in the Diaspora as we were briefed by Minnesota Advocates for Human Rights and LRC staff on the importance of taking statements from victims of the Liberian civil war.

One of the most important things victims need to know is that they need to tell their stories without fear of intimidation, to recount the horrors they and their families suffered without fear for their lives. In Monrovia and in the United States, many people are coming forward to tell their stories. These statement givers are calling names and implicating the perpetrators of the evils of the past, and are telling their stories, revealing a truth that has been hidden for so long. They are telling their stories to the Truth and Reconciliation Commission of Liberia in one of the most powerful and yet painful experiences of that war. But will the truth finally convince all of us Liberians that something went wrong in that nation or will we continue to pretend that the past should bury itself? 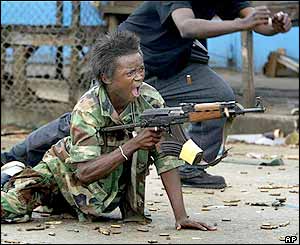 Liberian boy soldier firing in the distance during the Liberian civil war.

With the end of the fourteen year civil war, Taylor on trial for crimes against Sierra Leone and its people, Liberia is attempting to come to grips with our own devils. Interestingly, the Truth and Reconciliation Commission of Liberia has a huge responsibility in a country where many of the perpetrators of the violence live side by side with those who will be telling of the human rights violations. But to me, the worst is not in the telling; the worst or the best is in what happens after the truth is told by the survivors of that war. Will the rebels as well as the soldiers then seek forgiveness or will they continue to dispute the facts of their own past?

After all the traumatic telling of these sad stories, will someone help those who began the war and those who enjoyed destroying admit their crimes against their own country so that the Liberian people will come to grips with the truth of this horrific evil, so that healing in our nation will begin? Will the perpetrators of the violence then accept responsibility for the human rights violations, the hacking down of innocent civilians, the massacres of whole families, the burning down of whole towns and villages, the raping of women and children, the forceful enlisting of young boys and girls as child soldiers and sex slaves, and thereby seek forgiveness so that the healing that we need so much will begin or will they continue to claim, like Charles Taylor, that they did nothing wrong in ordering the destruction of our nation? Will the government after all of this set aside time for the real reconciliation of our nation?

Or will their supporters continue to cry out to God to punish those whose rights were violated or will we as a nation begin to heal? Will we learn to face the truth about what has happened to us as a people? Or will Charles Taylor continue to claim that he has done nothing wrong to Sierra Leoneans even as he had done to Liberians?

These questions should be answered by every Liberian because the effects of the war can never be calculated by any commission unless we as a people have answered these pertinent questions. What happened to Liberia can happen over and over to many more African countries and what happened to Liberia can happen to any nation in the world. War is not a monopoly of any one nation. This is why we are watching around the world, watching what goes on in the Hague and in Liberia.

If those who cause wars to destroy ordinary people’s lives are left to continue to wage more wars on innocent people, the world cannot expect to have peace. Charles Taylor is back in court again after postponing his own trial for more than six months. Liberians are telling their horrible stories of rape, torture, massacres, and devastation in a city so fragile, those who are the religious storehouse of the city have resulted to twisting the arm of God. But God is not asleep. It is Liberia and Liberians that continue to sleep.

The stories out of the hearings are beginning to shock those who have no reason to be shocked. After all, were we not there to see what these victims are talking about? Is it a wonder that those we glorify today may have been the ones who killed our families? But there is healing and reconciliation even in this gruesome story, but only if these stories are told. But that healing will come only when those who have committed the evil quit running and admit they were wrong. This admission will be the beginning of healing, and when we are healed, the rebuilding of Liberia will truly begin. Until then, we are only digging into the dirt like a hen who discovers its mother’s bones after a long time scratching into the earth. We need healing just like a drought land needs rain. So, let the telling of our stories continue. Congratulations to the brave who are able to tell even after so long a wait.

May Liberia live forever, and may the souls of those we will remember rest in peace.

In The Ruined City: A Poem for Monrovia

by Patricia Jabbeh Wesley (from The River is Rising)

In The Ruined City, the water flaps lightly
against the beach at night.
It is August, after too many years,
the rain still pours down like stones.
The Atlantic always knows when to go to sleep,
but all the girls roam dark nights
and men have forgotten they are still men.

Monrovia has lost its name.

The ocean roars like wild fire.
It roars like a hungry lion at dawn,
like the whirlwind.
In the ruined city, all the girls
have legs made from plastic weapons,
and the boys pretend it is okay
for the once beautiful girls to walk
around on plastic legs.
There is little time for weeping,

and all the world stands silent.

There are no more trumpets or drums.
The Dorklor dancer who lost his legs
in the war now sits by the road side, waiting.
It is something to lose your legs to a war,
they say, to Charles Taylor’s ugly war,
where the fighter cannot recall why he still fights.

The men have forgotten they used to be men,
and the women sit by the roadside wondering
what has happened to this land.
If those outside of here do not come,
Liberia will drown in this rain.
Outside my window, the rain taps hard
in Old Road Sinkor, for my homecoming.

One Response to “While Charles Taylor’s Trial Resumes in the Hague and His Family and Church Pray For His Acquittal in Monrovia, The Liberian Truth Reconciliation Commission (LRC) and the Public Listen to Heartbreaking Stories From Victims of the Fourteen-Year Liberian Civil War: But There’s the Liberian Question”

« The Kenyan Crisis: Another Country Going Down in Smoke: Are You Seeing What I’m Seeing? We Call on the United Nations and the World Leaders to Stop this Craziness Right Now!
Dr. Dickson Redd, A Liberian Educator, Scientist, Father, Husband, Mentor and Christian Professional Is No More: Another Liberian Hero Dying in Exile: May His Soul Rest in God’s Arms Forever »
%d bloggers like this: